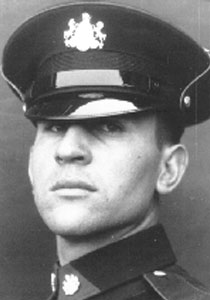 At 7:15 p.m. on March 31, 1940, Private Yashur and several Troopers were assigned to flood relief duty in Kingston. While directing traffic on Market Street, Private Yashur was struck by a speeding truck operated by a 28-year-old Wilkes-Barre driver. Private Yashur was taken to the Nesbitt Hospital, Kingston, where he died the following day. The driver was arrested and convicted on a charge of involuntary manslaughter.

Private Yashur is buried in St. Michael’s Cemetery in Treschow. He was survived by his mother, Mrs. George Yashur, of Treschow. At 24, he had completed three years and three months of Pennsylvania Motor Police service.