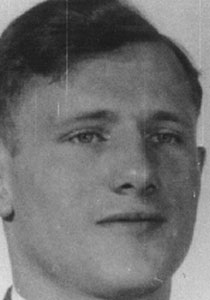 He enlisted in the Pennsylvania Motor Police from Mercer on September 1, 1937, and was assigned to Troop A-2, Harrisburg. He was 24 years old and 5’8½” tall.

At 6:15 p.m. on January 3, 1940, Private Sutton was detailed to assist R. G. Regi of McConnellsburg in serving a warrant on Brice Hann Sr., a livestock dealer. Hann was charged with passing a worthless $50.00 check. The fledgling constable had just been sworn in January 1. The men found Hann in the West End Restaurant, McConnellsburg, where they asked him to step outdoors. Hann left his companion and accompanied the officers. When Private Sutton informed Hann that he was being arrested for passing a bad check, Hann shot him with a gun that had been concealed in his overcoat pocket. Regi caught the wounded Trooper before he collapsed to the ground. Hann escaped down an alley on foot. Private Sutton was first treated by Dr. Edgar H. MacKinney, then rushed to Chambersburg Hospital where he underwent surgery performed by Motor Police surgeon Major David A. Johnston. Private William Paciecas donated blood for a transfusion. Private Sutton died that evening at 9:30 p.m.

Private Sutton was laid to rest with full military honors in the Prairie Catholic Cemetery, Harrisville, Butler County. He was survived by his mother, Mrs. J. C. Sutton, of Mercer. At 26, Private Sutton had completed one year and four months of Pennsylvania Motor Police service.

Over 100 Troopers and Fish/Game Wardens participated in the manhunt for Hann. The search was under the direction of Major Earl J. Henry and Lieutenant Colonel C. M. Wilhelm, assisted by Lieutenants A. H. Kratzke and Norman A. Annich. Within 26 hours, Hann was captured in a barn near Andover, 18 miles west of McConnellsburg, by Private George Wagenseller and Warden Frank Kirchner. When Colonel Lynn G. Adams was apprised of Hann’s capture, he allegedly shouted, “I can’t believe they took him alive!” Hann was charged with murder by District Attorney John Mintzer. This was the second murder of a Trooper in Fulton County. Nine years earlier, Sergeant Timothy J. McCarthy was killed by Marshal Lodge at Crystal Springs. McCarthy was assisting the Fulton County Sheriff in serving a warrant.