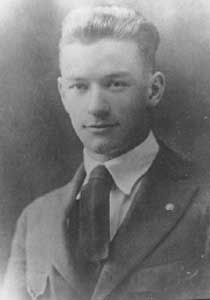 He enlisted with the Constabulary on May 1, 1924, and was assigned to Troop E, Harrisburg. On October 14, 1924, near the Graffenburg Inn, Adams County, Haley was shot and killed as he attempted to take Philip A. Hartman, a suspect in the Abbottstown State Bank holdup, into custody. He died at the scene. Hartman was tried and found guilty of murder. He was sentenced to die in the electric chair. The sentence was carried out November 30, 1925, 13½ months after Haley’s murder. Hartman was the 155th person to die in the Pennsylvania electric chair. This form of execution replaced hanging in 1915.

Haley was buried in the St. Patrick’s Church Cemetery, Pottsville. He was survived by his mother, Mrs. Ellen J. Haley, of Pottsville. Haley, 25, had completed five months of Constabulary service.