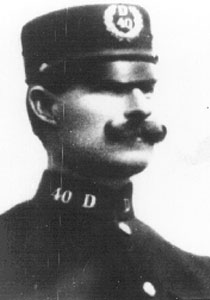 Francis A. Zehringer was born February 18, 1872, at Conshohocken, Pennsylvania.

He enlisted with Troop D, 4th US Cavalry, and served from August 7, 1898, to February 22, 1903, before joining the 60th Company, US Coast Artillery on April 6, 1903. Before his honorable discharge April 7, 1905, he was commended for bravery by his post commandant. Private Zehringer was enlisted by Captain Joseph F. Robinson, Troop D, Punxsutawney, December 15, 1905. His home address was 120 Sixth Avenue, Conshohocken. Prior to enlistment, he was a tinsmith for the Camden Iron Works. He was 33 years old and 5’10” tall.

He was the second Constabulary member killed in the line of duty, as he and other Troop D members attempted to arrest heavily armed Black Hand Society fugitives on September 2, 1906. When the first group of Troopers responded to a call for help from Sergeant Joseph Logan, Private John F. Henry was mortally wounded and Privates Homer Chambers and William Mullen were seriously wounded attempting to rescue Henry. Private Zehringer was among the second detachment summoned to the scene at 6:30 p.m. A home at Florence, Jefferson County, was barricaded by fugitives wanted for murder. Covered by heavy gunfire from other Troopers, Privates Zehringer, Robert Cummings and August Grosser rushed to the house, battered in the side door, and entered the dwelling. They were fired upon by fugitives from a stairway. Private Zehringer was mortally wounded. Privates Cummings and Grosser escaped. Realizing that lives were being sacrificed uselessly, the Troopers, under cover of darkness and a rainstorm, planted dynamite at the base of the house. At dawn, the dynamite was detonated. The house was destroyed, and its occupants killed. Privates Chambers and Mullen recovered from their wounds. At 34, Private Zehringer had completed nine months of Constabulary service. He was survived by his father, a resident of Conshohocken.

Private Zehringer’s body was taken from Punxsutawney to Conshohocken by train. He was buried in the Riverside Cemetery, Norristown.