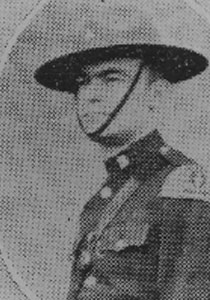 Prior to his enlistment with the Constabulary, he served in the U. S. Navy from July 2, 1919, to July 3, 1924, as a musician, first class. Maderia enlisted with the Constabulary from Philadelphia on May 1, 1930, and was assigned to Troop B, Wyoming. He was 30 years old. At 4:20 p.m. on December 10, 1934, Maderia, and Private Worden A. Bader were returning from court, where they had testified in the Theodore Morro murder case. In the city of Minooka, Lackawanna County, their vehicle skidded on an ice-covered street and struck a telephone pole. Maderia died of a fractured skull in the Scranton State Hospital at 1:45 a.m., the following day. Bader survived his injuries. Maderia is buried in Charles Evans Cemetery, Reading. He was survived by his father, Mr. William Maderia, Reading. Maderia, 34, had completed four years and eight months with the Constabulary.