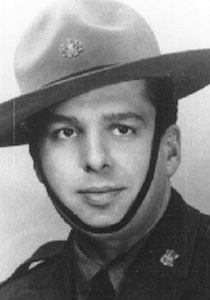 At 8:00 p.m., November 2, 1953, Private Clouse and Corporal Harold G. Rice were detailed to serve a disorderly conduct warrant on Edwin C. Stanyard. Stanyard was a resident of White Township, Beaver County. He had barricaded himself in an upstairs bedroom. When the officers broke down the door, they faced Stanyard’s gunfire. Private Clouse was killed by a bullet to his head. Corporal Rice was shot in the mouth, but able to return fire. He killed Stanyard with two shots to the head. Dr. H. E. Douds, of Beaver Falls, had accompanied the Troopers to the Stanyard residence, but remained in the police car. His medical aid saved Corporal Rice’s life, preventing a triple slaying. Corporal Rice underwent surgery for the removal of a bullet which had lodged in his neck below the brain. Dr. Douds immediately started a trust fund for the Clouse family.

Private Clouse is buried in Alto Rest Cemetery in Altoona. He was survived by his wife, Mrs. Camilla M. Clouse, of Altoona. At 29, Clouse had completed seven years and three months of Pennsylvania State Police service.