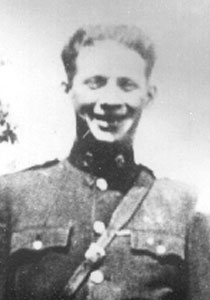 He enlisted with the Constabulary from Reynoldsville, on June 1, 1929, and was assigned to Troop A, Greensburg.

On July 18, 1930, Privates Stewart Walter B. Kunkle, James T. Knox, Leon H. Gage and George R. Belin, were assigned to a surveillance detail at the Grandview Cemetery near Monongahela, Washington County. In response to a Black Hand Society blackmail threat, $10,000 was placed in a decoy box at the cemetery. Private Stewart approached a passerby for questioning. The stranger pulled a gun and fired three shots at him. Private Stewart returned fire and killed his assailant, John Sabo. He died while undergoing surgery at Memorial Hospital, Monongahela.