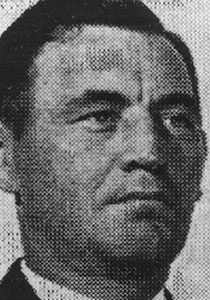 He enlisted in the State Highway Patrol from Emporium on October 2, 1930, and was assigned to Troop A, Harrisburg. Private Craven was 24 years old and 5’11½” tall.

At 11:50 p.m. on October 8, 1938, Private Craven and Private Joseph M. Williams were on US Route 30, four miles east of Gettysburg, checking motor vehicles for identification. The Troopers had two vehicles stopped and left their patrol car to check the operators out. A car driven by a Hanover resident struck both Craven and Williams. It then hit the patrol car before coming to a rest in a ditch. Privates Craven and Williams were taken to Annie M. Warner Hospital in Gettysburg. Private Williams was pronounced dead upon arrival. Craven died three days later on October 11.

Private Craven is buried in Wildwood Cemetery in Williamsport. He was survived by his wife, Mrs. Charles H. Craven, of Blossburg. At 32, Craven had completed eight years of Pennsylvania Motor Police service. This was the Department’s first double tragedy resulting from a motor vehicle accident.