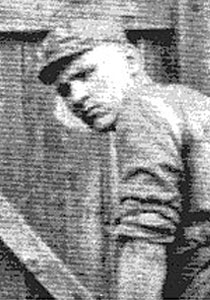 He enlisted with the Constabulary August 1, 1917, and was assigned to Troop D, Butler. He resided at 48 Grace Street, Swoyersville.

On April 28, 1918, Privates Czap, Van Kampen and Kelly responded to a call from Homer City about a robbery. As the trio approached the hideout of the robbers at Tide, Indiana County, just before midnight, Czap was shot in the chest from ambush. He was taken to the Indiana Hospital and died five hours later.

An investigation revealed that the four men robbed of $1500 were professional gamblers, who were robbed by men they had fleeced.

Private Czap’s body was shipped by rail to Wyoming, Pennsylvania. He was buried in Holy Trinity Cemetery, Swoyersville, with military honors in which 18 Troopers participated. His fellow Troopers were pallbearers.

He was survived by his mother, Mrs. Anna Netick, of Swoyersville.

At 24, he had completed nine months of Constabulary service.

“The hero’s death, in the face of overwhelming odds, is in keeping with the splendid records by the members of this Force in all time past. Private Czap’s death is a striking example of the fact that one need not go overseas, or don the khaki, to prove his loyalty to his country and his devotion to the Commonwealth of Pennsylvania. It is this unfaltering devotion to duty which has made the Pennsylvania State Police Force an example and a model that other states are striving to exemplify.”