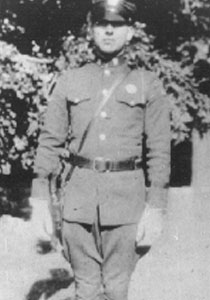 At 9:15 a.m., October 14, 1929, while rounding a curve on Route 11, 100 yards east of Shickshinny, Luzerne County, Hammond skid on the wet roadway. He was thrown from his motorcycle into the path of a motor vehicle approaching from the opposite direction, and run over. He was taken to the Nanticoke Hospital, where he died at 10:15 a.m. on October 14, 1929.

Hammond is buried in Forest Hills Cemetery, Costello, Potter County. He was survived by his father, Mr. L. L. Hammond, of Austin. Hammond, 24, had served ten months with the State Highway Patrol.