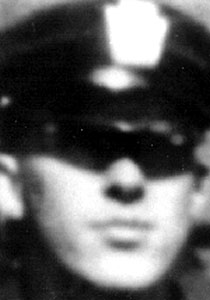 At 3:30 p.m. on April 19, 1929, Patrolman Swanson and Patrolman Peter Carlson were testing brakes on vehicles on Route 20, just east of North East, Erie County. They stopped a Lincoln Sedan occupied by three men, Fred Elverson, Joe Invie and Samuel Bard, who had stolen the vehicle in Minneapolis, Minnesota. When they failed to properly identify themselves as owners of the vehicle, they were taken to a squire’s office in North East for questioning. Bard shot Patrolman Swanson, who died instantly. Elverson was captured, and tried to commit suicide. Bard and Invie drove away, but abandoned the Lincoln near North East, where they were captured. Bard pleaded guilty to second degree murder and was sentenced to 10 to 20 years. Invie pleaded guilty to the same charge and was sentenced to 5 1/2 to 12 years. Elverson was charged with involuntary manslaughter and was sentenced to 4 to 10 years. Patrolman Swanson was the State Highway Patrol’s first murder victim.