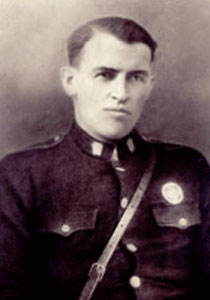 On October 16, 1926, while on motorcycle patrol about ½ mile north of Mills Corner near Towanda in Bradford County, Hanahoe attempted to halt a motor vehicle driven by a fugitive suspect. The fugitive forced Hanahoe off the road against a concrete abutment and into a telephone pole.

He was taken to the Robert Packer Hospital in Sayre, Pennsylvania, where he died of his injuries on February 27, 1927.

Hanahoe was buried in St. John’s Cemetery in Pittston.

Hanahoe, 24, was the State Highway Patrol’s first fatality in the line of duty. He had completed one year of service at the time of his death.