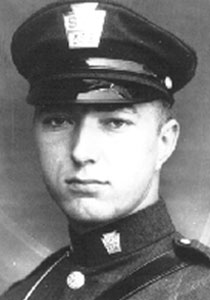 He enlisted in the State Highway Patrol from Luzerne, on April 21, 1936, and was assigned to Troop F, Franklin. Simoson was 21 years old and 5’11” tall. At 8:05 a.m. on December 1, 1937, Patrolman Simoson was patrolling on Main Street in Smethport Borough, McKean County, when his motorcycle skidded on a curve. Patrolman Simoson lost control and was thrown from the motorcycle. He was pronounced dead at the accident scene. Patrolman Simoson’s funeral Mass was held at Sacred Heart Church, Luzerne.

He is buried in Saint Ignatius Cemetery, Pringle, Luzerne County. Patrolman Simoson was survived by his father, Mr. William Simoson, of Luzerne. At 23, he had completed one year and eight months of State Highway Patrol service.