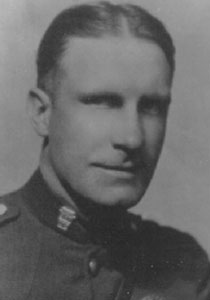 He enlisted with the State Highway Patrol from Wyoming, Pennsylvania, on February 14, 1927, and was assigned to Troop A, Harrisburg. He was 29 years old, and 6′ 0″ tall.

At 8:00 p.m., August 28, 1928, while attempting to apprehend a speeding motorist on Route 826, Jackson Township, Tioga County, Patrolman Proof lost control of his motorcycle and struck a bridge abutment. He was taken to Arnot-Ogden Memorial Hospital, at Elmira, New York, where he died of his injuries at 6:45 a.m., August 29, 1928.

Patrolman Proof is buried in Terrytown Cemetery, Wyalusing, Bradford County. He was survived by his parents, Mr. and Mrs. Proof, of Wyoming. At 30, Patrolman Proof had completed one and a half years of State Highway Patrol service.