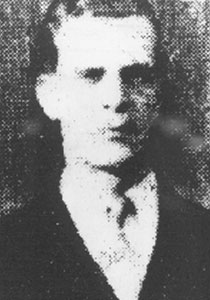 He enlisted with the State Highway Patrol from Blairsville, on December 7, 1931, and was assigned to Troop B, Greensburg. He was 25 years old and 5′ 11″ tall.

Brantlinger was on patrol on U.S. Route 19 in South Fayette Township, Allegheny County, on September 3, 1933. At 10:40 p.m. Brantlinger approached the Melrose Service Station near Bridgeville, where he believed a theft of gas and oil was in progress. When he dismounted from his motorcycle to investigate, he was hit with rifle fire. He was taken to the Mercy Hospital, Pittsburgh, where he died one hour later. Thomas Davis, Jr., was charged with murder and sentenced to life in prison.

Brantlinger is buried in Blairsville Cemetery. He was survived by his mother, Mrs. Frank Brantlinger, of Blairsville.

Brantlinger, 27, had completed one year and ten months of State Highway Patrol service.