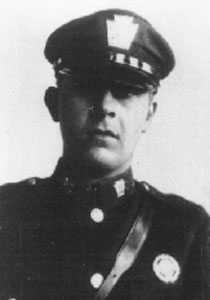 He enlisted with the State Highway Patrol from Highspire on May 15, 1928, and was assigned to Troop A, Harrisburg. He was 22 years old and 5′ 9″ tall.

At 4:45 p.m. on August 18, 1933, he was on patrol on U.S. Route 120, 2½ miles east of Sunbury in Upper Augusta Township, Northumberland County, when he was struck by a motor vehicle recklessly driven into the path of his motorcycle. Patrolman Householder was thrown from his motorcycle and seriously injured. He died at Mary M. Packer Hospital, Sunbury, on August 20, 1933, at 12:54 a.m. The motor vehicle was driven by James W. Opie of Shamokin, who was charged with involuntary manslaughter. Patrolman Householder is buried at Highspire Cemetery.

He was survived by his mother, Mrs. C. Edward Householder, Sr., of Highspire. At 27, Patrolman Householder had completed five years and three months of State Highway Patrol service.