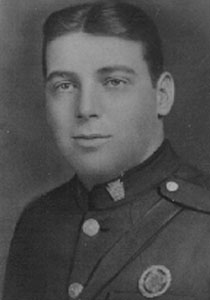 He enlisted with the State Highway Patrol August 8, 1927, from Galeton, Pennsylvania, and was assigned to Troop A, Harrisburg. He was 20 years old and 5′ 11½” tall.

At 9:30 p.m., April 1, 1928, while Miller was patrolling through the city of Pottstown, his motorcycle skid on the street car tracks. He was thrown from the motorcycle, fell to the brick street, and was seriously injured. He was taken to A. C. Shute Homeopathic Hospital in Pottstown where he died at 11:55 p.m.

Miller was buried in West Hill Cemetery, Galeton. He was survived by his parents, Herman and Susan Miller, of Galeton. Miller, 21, had served seven months with the State Highway Patrol.