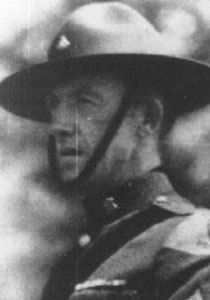 James A. Seerey was born June 30, 1892, at Philadelphia, Pennsylvania.

Prior to his enlistment with the Constabulary, Seerey served with the US 10th Cavalry from December 4, 1912, to June 5, 1918. He transferred as a second lieutenant to an Infantry Division where he served until August 1, 1919. He enlisted with the Constabulary from Philadelphia on February 2, 1920, when he was 27 years old. He was assigned to Troop B, Wyoming.

In the afternoon of September 5, 1934, Sergeant Seerey was participating in mounted drill exercises at Troop B Headquarters. At 2:30 p.m., while executing a hurdle-jumping maneuver, his horse struck the hurdle. Horse and rider were thrown to the ground. Sergeant Seerey sustained a fractured pelvis and internal injuries. He succumbed to these serious injuries five days later.

Sergeant Seerey is buried in St. Ann’s Cemetery, Freeland. He was survived by his wife, Mrs. Elsie Seerey, of Wilkes-Barre. At 42, Sergeant Seerey had completed 14 years and 8 months of service. He was the highest ranking member of the Constabulary to die in the line of duty.