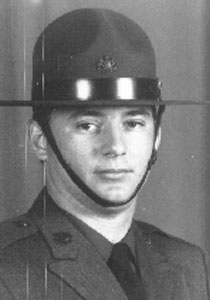 Prior to enlisting in the Pennsylvania State Police, he served four years with the US Army including 18 months as a combat helicopter pilot in Vietnam. He was promoted to First Lieutenant prior to discharge from active duty and reached the rank of Major in the Pennsylvania National Guard as the commander of an aviation squadron at Fort Indiantown Gap.

He entered the State Police Academy on March 6, 1975, and was assigned to Troop J, Lancaster, upon graduation. He was 25 years old and 5’6½” tall. He transferred to the Aviation Division of the Bureau of Patrol in 1986.

At 7:30 a.m. on April 12, 1989, Corporal Almer was piloting H-1 with Trooper Wayne D. Bilheimer, a criminal investigator from Troop J, Lancaster, as his observation passenger. The helicopter took off from Aviation Patrol Unit No. 1 based at Reading Municipal Airport to search the Susquehanna River for the body of James C. Groff, a 50-year-old farmer from Holtwood, who reportedly jumped into the river. At 9:44 a.m., while flying at an altitude of 90 feet, the helicopter struck a 34,000-volt power line. The craft crashed into 10 feet of water in a channel between Lower Bear Island and Boeckel’s Landing on the west bank of the river in southern York County, just north of the Maryland border.

He was survived by his mother, Mrs. Anita Almer, of Bethlehem. She was presented with the State Police Cross. Corporal Almer was engaged to be married.

At 39, he had served 14 years and one month with the Pennsylvania State Police.