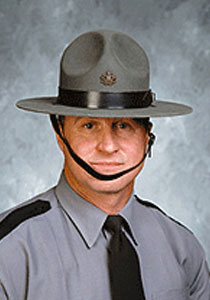 Corporal Pokorny lost his life on December 12, 2005, shortly after 2:00 a.m., when he stopped a car for speeding on SR 279(also known as the Parkway) outside the City of Pittsburgh, Allegheny County. During the traffic stop, a struggle ensued. Corporal Pokorny was shot twice with his service weapon. One of the wounds proved fatal, and Corporal Pokorny died at the scene. The occupants of the vehicle all fled the area.

After an extensive investigation by State Police, Allegheny County Police, City of Pittsburgh Police, and numerous other law enforcement agencies, on December 14, 2005, Leslie Mollett was charged with and arraigned on criminal homicide and other related crimes relative to the death of Corporal Pokorny. At the time of this incident, Mollett was on parole from prison for other offenses that he committed.

Thousands of law enforcement officers from Florida to California were in attendance at St. Frances Cabrini Church in Aliquippa on December 16, 2005, for the memorial service. From a rifle tribute, to a riderless horse, the 22-year veteran was honored in every way.

Governor Edward G. Rendell noted, “Corporal Pokorny died while serving the citizens of the Commonwealth. His tragic death reminds us once again that our law enforcement personnel put their lives at risk each time they put on their uniforms.”

Corporal Pokorny is survived by two children; a daughter, Alexandre, 15, and a son, Joseph, 17. He is also survived by his parents, Mr. & Mrs. Joseph R. Pokorny, Sr., of Aliquippa, and a brother, Frank, and sister, Laura.

At 45 years of age, Corporal Pokorny, a 22-year veteran of the Department, was the 91st member to be killed in the line of duty.