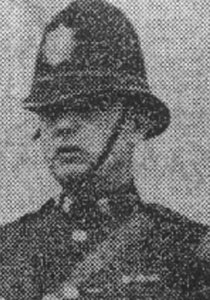 Corporal Naughton served in the US Army Medical Corps from September 28, 1917, to July 23, 1919, and saw service in England and France during World War I. At 21, Corporal Naughton enlisted in the Constabulary from Sharpsburg, on November 1, 1926, and was assigned to Troop A, Greensburg. As a result of the State Police/Highway Patrol merger, he was reassigned to Troop B-1, Washington.

At 3:35 p.m. on January 30, 1939, Corporal Naughton, Privates Rittelmann and Fair, Washington County Detective Powell, and Sheriff Matt Armstrong responded to a call for assistance. While serving an arrest warrant on Frank Palanzo, Chief of Police William Morgan from Fredericktown was threatened by Palanzo. Palanzo had also threatened his family with a loaded gun. He was barricaded in a home located in a mining town in East Bethlehem Township, Washington County, near Clarksville. Palanzo threatened to shoot anyone who came near him. Corporal Naughton entered the three-story home and climbed the stairs to the second floor while calling for Palanzo to come out and talk it over. Palanzo opened the bedroom door where he was hiding, and shot Corporal Naughton at close range. Suffering a severe chest wound, Corporal Naughton fell face down to his death. Private Rittelmann carried Corporal Naughton from the landing. Reinforcements were summoned and the detail began hurling tear gas canisters into the house. Palanzo surrendered. He was tried for murder and drew a life sentence.

Corporal Naughton was buried in Greenwood Cemetery near Sharpsburg. He was survived by his wife, Mrs. Mary E. Naughton, of Dormon. At 40, he had completed 12 years and 3 months of Pennsylvania Motor Police service.