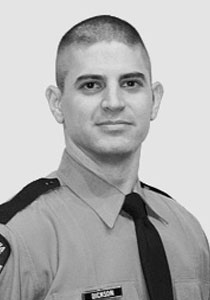 He enlisted in the Pennsylvania State Police on June 11, 2007. After graduation from the Academy, he was assigned to Troop N, Fern Ridge, on December 21, 2007. On July 20, 2013, he was promoted to Corporal and assigned to Troop K, Philadelphia. On June 21, 2014, he transferred to Troop R, Blooming Grove. He served as a Patrol Unit Supervisor at both Stations after his promotion.

Cpl. Dickson had a passion for DUI enforcement, earning numerous awards from the Department and the Pennsylvania DUI Association. During his career, he became one of only a small number of Troopers certified as a Drug Recognition Expert (DRE) to further his skills in DUI enforcement.

On September 12, 2014, at approximately 2250 hours, Cpl. Dickson was one of two members shot in an ambush outside of the Blooming Grove Station. He passed away due to the wounds he received. Tpr. Alex T. Douglass, also shot in the attack, was critically wounded.

Mass of Christian Burial was held for Cpl. Dickson on September 18, 2014 at St. Peter’s Cathedral in Scranton, PA. He was buried with full honors at Dunmore Cemetery in Dunmore, PA.

Cpl. Dickson served honorably as both a Pennsylvania State Trooper and a United States Marine. He is survived by his wife, Tiffany, and two sons.