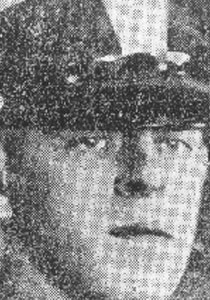 At 11:50 a.m. on December 27, 1929, Corporal Paul and Patrolman Ernest Moore set up a roadblock on the Butler Highway, three miles east of New Castle, Lawrence County, near Baldwin Hill, to stop a Chevrolet sedan, bearing Ohio registration plates. The officers stopped the suspect vehicle, driven by Glenn Dague. With Dague were Irene Schroeder and her 5-year- old son. When Corporal Paul asked Dague to step out of the car, Schroeder came around from the passenger side and fired shots at both officers. Corporal Paul was taken to Jameson Memorial Hospital at New Castle, where he was pronounced dead upon arrival. Patrolman Moore recovered from his wounds. Escapees Dague and Schroeder were apprehended 19 days later in a shoot-out with a sheriff’s posse in Arizona. They were extradited to Pennsylvania to face murder charges. A special prosecutor, the renowned Charles J. Margiotti of Punxsutawney, handled the Commonwealth’s case. Both defendants were found guilty and died in the electric chair at Rockview Penitentiary on February 23, 1931, just 14 months after Paul’s murder. Schroeder was the first female to be executed at Rockview. Constabulary Corporal William Hanna was picked as a substitute to witness the executions. Patrolman Moore later advanced to the rank of Captain and commanded Troop B, Washington.

Corporal Paul was buried in Mt. Prospect Cemetery, Hickory. He was survived by his mother in Washington. At 29, Corporal Paul had completed four years of State Highway Patrol service.