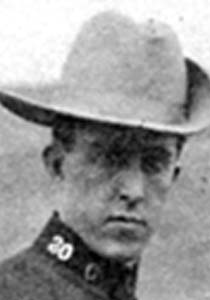 Prior to his enlistment with the Constabulary, Corporal McEvoy served with Company K, 4th Regiment, Pennsylvania National Guard, from April 28, 1903, to June 5, 1910. He enlisted with the Constabulary on June 6, 1910, one day after concluding his Pennsylvania National Guard service. He was 5′ 5¾” tall. Prior to enlistment, he was a tailor in Lancaster. He was promoted to Corporal on March 1, 1920, and transferred to the training school at Newville on August 1, 1921.

While on duty, he stopped his vehicle near Petersburg, Lancaster County, to render assistance to a stalled motorist, at 9:30 p.m., September 18, 1923. As he was walking along the roadway, he was struck by an approaching vehicle and seriously injured. He was taken to Lancaster General Hospital, where he died September 21, 1923.

Corporal McEvoy was buried in Woodward Cemetery, Lancaster. He was survived by his wife, Mrs. Ben F. McEvoy of Lancaster, and a son. At 41, Corporal McEvoy had completed 13 years of Constabulary service, and was the Department’s first motor vehicle/pedestrian fatality.